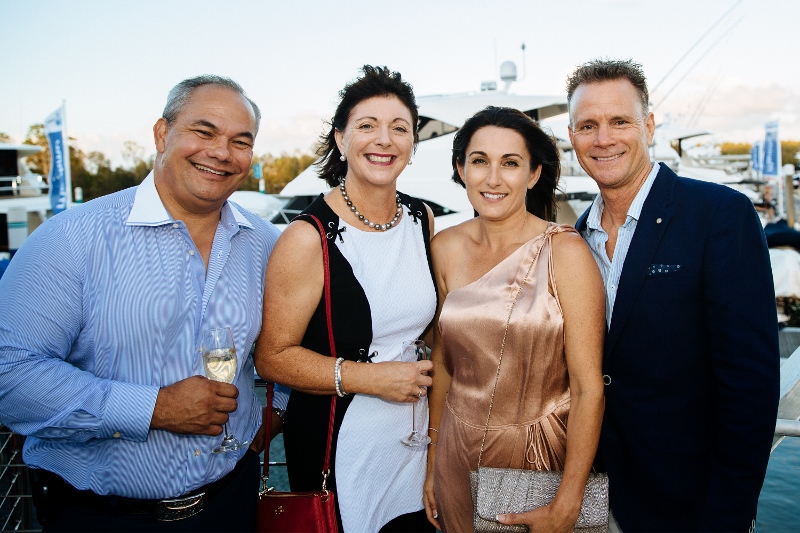 BMS Maritimo is now based on the marina at Sanctuary Cove, prime position for displaying the latest models in the Maritimo range.

Taking up residence at a waterfront position in The Marine Village Sanctuary Cove, BMS Maritimo is now front and centre for its own, year-round boat show, showcasing $10 million in vessels right out front of its brilliant showroom.

The new premises at Sanctuary Cove will become Maritimo’s main sales and marketing hub on the Gold Coast giving prospective purchasers an opportunity to experience all aspects of the brand, its range of models and for clients, cooking classes with celebrity chefs.

Ormonde Britton, Dealer Principal, now in his twelfth year with Maritimo, is thrilled with the new premises.

“Our customers are now able to experience all aspects of the Maritimo brand and its range of models, in a life-like but relaxed setting before they purchase a boat,” said Britton.

As Dealer Principal for both BMS and Maritimo Gold Coast, Ormonde Britton will remain at Hope Harbour to run Maritimo Gold Coast, while splitting his time with his dealer principal duties at BMS, Sanctuary Cove, along with the role of Australasian Sales Manager, assisting Australia and NZ Maritimo consultants.

In 2015 Britton extended his team to take on the Maritimo dealership at Runaway Bay, known as BMS.  After two very successful years at Runaway Bay, the BMS Sales Office has now relocated to Sanctuary Cove into a world-first, state of the art, experience centre for Maritimo.

The new centre comes with berthing space for up to 10 vessels.  “The extra berth space at Sanctuary Cove gives us the ability to display more of the models in Maritimo’s expanding fleet in addition to pre-owned vessels,” he said.

Inside is a complete working replica of the galley from a Maritimo M70 cruising motoryacht.  The fit out of the facility showcases the various high quality timbers that are used to finish off the company’s range of vessels with work stations manufactured in a variety of timbers by Maritimo’s craftsmen.

Home to the new HQ for BMS Maritimo, Sanctuary Cove is a boaties paradise.

The fabrics used by Maritimo are all highlighted along with state of the art audio visual equipment showcasing Maritimo’s complete range. Just like the Maritimo motoryachts, the showroom galley is decked out with Miele appliances.  BMS Maritimo will use this facility to host regular celebrity chef cooking demonstrations, interactive masterclasses and wine tasting events.

Miele Ambassadors include celebrities like Maggie Beer and Shannon Bennet. Other events involving brand partners such as Maserati and various selected high-end brands will be held at the centre to broaden brand building and client loyalty.

“We look forward to welcoming both old and new Maritimo customers to BMS Maritimo Sanctuary Cove. The new centre is the perfect place for BMS which is one of the country’s premier marine dealerships. I am proud to have contributed to that, and am committed to its ongoing growth.”

BMS Maritimo will host an ‘open-house’ 17 to 19 March for all customers and friends interested in checking out the new showroom, as well as inspecting the latest Maritimo models.