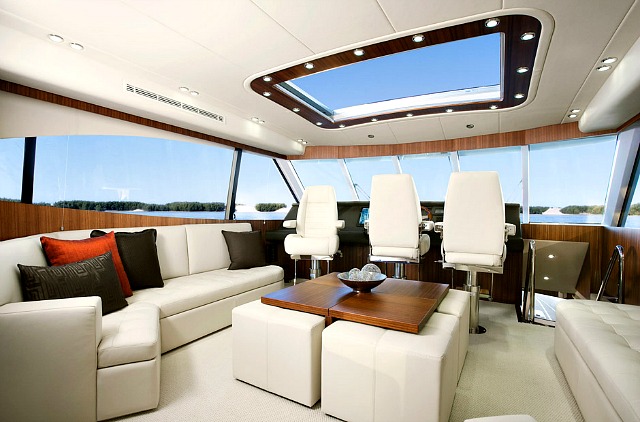 Dubbed the ‘Ferrari of the boating world’ and a must have play thing for everyone from Hollywood film stars to European aristocracy a gleaming Carlo sports boat will be on display at this year’s Sanctuary Cove International Boat Show.

The classic, hand-made vessel crafted from planks of mahogany and fitted out in plush leather is the pride and joy of Australian boating industry icon and luxury cruiser Maritimo founder, Bill Barry-Cotter.

The only one of its kind Bill’s Carlo is kept safely in its own undercover storage shed at Maritimo’s Hope Harbour marina and service centre and only gets to see salt water on special occasions, often for a charity event, or when Bill and wife Lesley want to take a nostalgic cruise around the Gold Coast’s waterways. Long before starting Maritimo, Bill met the admired Italian boat builder Carlo Riva in 1998 and the European boat building legend gave him a complete set of plans for the Riva Aquarama.

Riva was founded in 1842 by Pietro Riva and then run by Carlo until 1969 when it was sold to Whittaker Corporation.

The legendary Riva Aquarama’s were produced between 1962 and 1996. The sleek, highly varnished, hand- crafted timber vessels were prized and they have appeared in many movies including GoldenEye and Ocean’s Twelve.

After Bill was given the Aquarama plans by Carlo Riva he set about having the boat built, starting it off firstly as a project for his apprentices. The vessel was started in 1999 and finished under the watchful eye of Maritimo Master Boat Builder Keith Oldrey in 2004.

The vessel was finished off by installing two V-drive Mercruiser 300hp V8 motors giving it a top speed of more than 50 miles per hour.

The cold moulded manufacturing technique used for Bill’s Carlo saw strips of mahogany timber hand laid over each other to provide superior strength and the mirror finish exterior.

“This boat is a total one-off and we like nothing better than taking it for a cruise around the Gold Coast’s waterways,” said Bill.

“Carlo Riva was a superb craftsman, a genius and the world’s best wooden boat builder.

“This design was so special a Riva Aquarama even took out a London to Monte Carlo boat race ahead of much larger vessels..”I was delighted when Carlo gave me the complete set of plans to build one.”