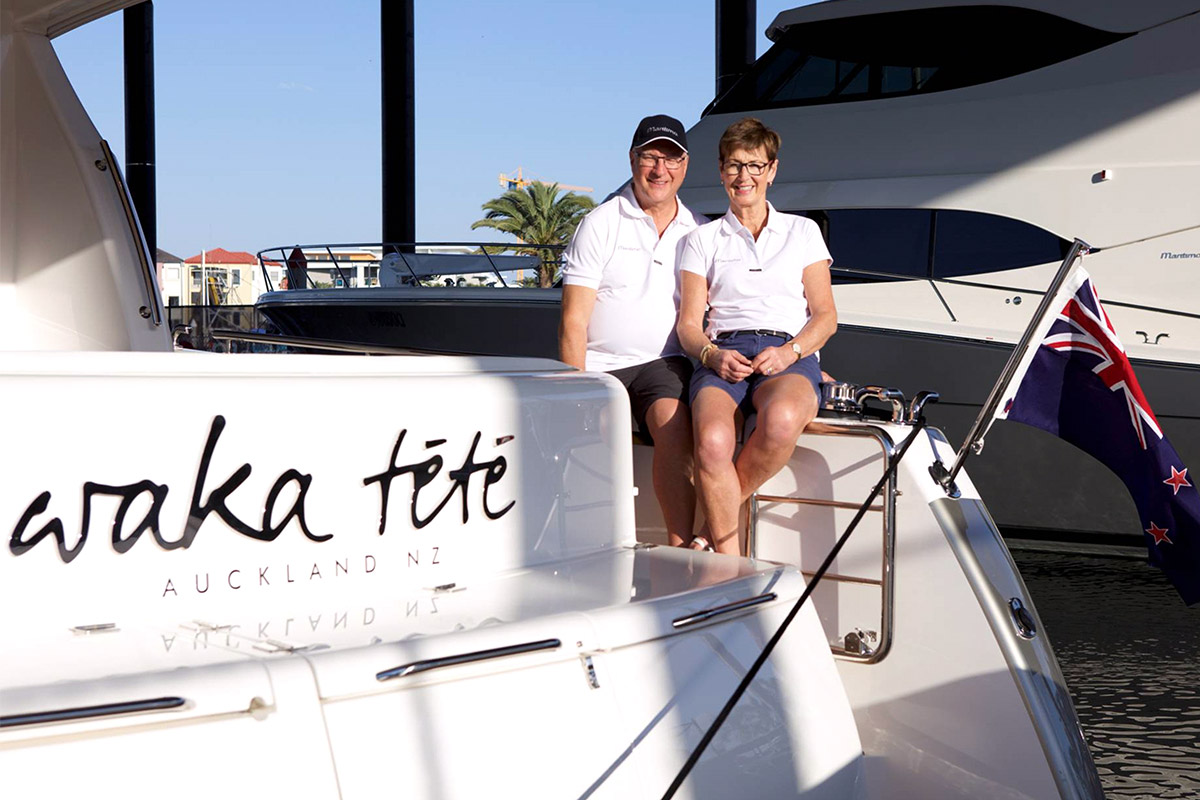 New Zealanders Brian and Cath Carran, who took delivery of their Maritimo S70 motoryacht in 2017, have been living the dream on their boat, Waka Tete, and would not swap it ‘for anything in the world’. They have just returned from a six week sojourn to the Barrier, 40 nautical miles from their home port of Gulf Harbour, just north of Auckland.

The year before their summer expedition saw them travel to the Marlborough Sounds, at the top of New Zealand’s South Island, then up over the North Island and down the west coast in December before travelling back up the east coast in late March.

“This year’s expedition was amazing and the fishing was particularly good.” said Brian. “In one week when we had three friends fly in we landed nine kingies and a couple of monster snapper in the four to five pound range. The weather was excellent for the whole trip.”

He said during their six weeks away they that three groups of visitors fly in at various stages and join them on the boat. “The most we had onboard for a week was five, but we have had up to seven people living onboard at a time and the S70 has no problems handling that number,” he said. “The way that the spacious cockpit opens up to the galley and the lounge makes for easy movement and different entertainment options. With four cabins and four heads, one in the lazarette, there’s plenty of accommodation and space.”

Brian said that with refrigeration in the cockpit opening onto the swim platform deck the fish landed are on ice within minutes.

The Carran’s S70 made the passage from the Gold Coast to Auckland in 100 hours and the skipper responsible for the delivery said the boat was one of the best performing vessels he had taken across the Tasman in 50 trips.

“The best thing about this boat is that we own it and it is very easy to handle despite its size,” said Brian. He said the lazarette was the ‘perfect man shed’ easily accommodating all tools, fishing and diving gear, watermaker, compressor and also the washing machine and dryer.

The Carran’s undertook worldwide research visiting numerous major boat shows before settling on the Maritimo S70 and they say they ‘would not swap her for any boat in the world’.

“She handles big seas easily, even though we don’t go chasing them, and the after sales support and contact from the Maritimo team is reassuring and shows they really do care about their boats and their clients,” he said.

To learn more about the Maritimo S70 visit: https://www.bmsgc.com.au/listing/maritimo-s70-sedan-motoryacht