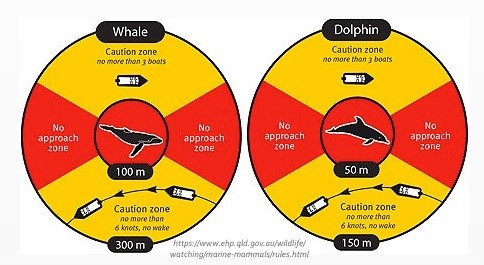 It is important to know the rules for watching humpback whales and dolphins in the open ocean. These rules are not only for the health and safety of the animals, but also to ensure people are safe and secure in their boats. Remember that it is us (boats and humans) who are in the way of these majestic creatures.

CAUTION ZONE: The ‘caution’ zone is an area surrounding a whale or dolphin in which boats cannot travel at speeds of more than 6 knots or speeds that create a wake. The caution zone extends out 300 metres from a whale, and 150 metres from a dolphin.

3-BOAT RULE: A boat cannot enter a caution zone if three boats are already present within the caution zone of an animal.

To protect the marine mammals:

CLICK HERE for the complete rules from the Queensland Government.